Marriage Equality: the debate goes on

An acquaintance of mine emailed me recently as part of his fundraiser for his trip to Washington to support traditional marriage: 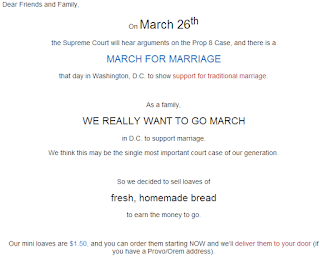 We've been having a pleasant dialogue since. I wonder how many similar discussions are going on in the world right now.

Thanks for the invite below. Marching in Washington D.C. sounds like an exciting opportunity! I've advocated publicly for traditional marriage myself, via calling voters in Maine in 2009, and I also feel that the Prop 8 case is a very significant one.

I did want to ask though, if you wouldn't mind sharing, why you feel to support a traditional version of marriage rather than a more inclusive version, i.e. one that accommodates homosexual as well as heterosexual orientation. Since opposite-sex marriage is much more difficult an arrangement for gay people than same-sex marriage, some argue that a more inclusive marriage (that is to say, for gay people as well as straight people) helps to strengthen marriage by making marriage an expectation and opportunity for a larger portion of our community. Buttressed by traditional norms of caretaking and commitment, gay couples and their families arguably stand to gain from entering into marriages, just as their opposite-sex counterparts do.

Thanks for responding! Great to hear from you. This is a very thoughtful question, and I appreciate you asking it because I think discussion on this issue is so important.
There are a couple of reasons I feel strongly that marriage should continue to be defined as between a man and a woman. The most important to me is my religious beliefs, of course.

It makes sense to be candid about that, and I respect your acknowledgment of the fact. Many LDS members understandably take the same position for religious reasons. Some of them then go on to make secular arguments that they're not very serious about, as a pretext for why they truly take the position they do.

But since my religious beliefs don't matter to most people, there are a few secular reasons I believe this is the best policy as well. Most of them center around children. Research shows, and I believe strongly, that children do best when they have both a mother and a father.

Legalizing gay marriage would almost without question lead to legalization of adoptive rights for gay and lesbian couples. Some argue that this would be better than leaving children in foster care or orphanages. Some also argue that gay couples are also more loving and caring than many heterosexual couples. I can definitely see their point on both of these counts.

That's fair: I think you're right to acknowledge that there are gay couples that are more loving and caring to children in their care than some heterosexual couples.

However, if our aim is to get children out of foster care or orphanages, or to increase kindness in the home, there are other ways to accomplish this goal than legalizing a type of union in society that can never hope to replicate the ideal situation of having both a mother and a father in the home.

Again, I would challenge your claim that a mother and a father is an ideal situation for children. If you presume the fact, then there is little use trying to prove it: if you claim that a particular family structure is ideal, how could any other family structure even have a chance of besting it? Also, if you wish to create better homes for children, why wouldn't you spend your limited resources advocating research-based drivers of parenting outcomes, such as (1) stable, (2) low-conflict, (3) dual parenting, (3) drug-free homes with (4) adequate, steady income? Those four factors account for much more of the variability in child welfare than the number of genders in the parenting couple. Importantly, marriage can contribute significantly to the first three factors: and given the immense number of children that are and will grow up in same-sex couple households regardless of the outcome of the marriage equality debate, it would be in their interest to have their same-sex couple parents married rather than not married.

Children do not have a voice in this debate, so we must speak up and explain what would be best for children and their development in society.
I would agree that children do not have a voice in this debate, but that fact does not mean that your position or its opposite is any more right than the other.
Additionally, the legalization of gay marriage has shown in many cases to decrease religious freedom, as well as parental rights in education. Both of these concern me deeply as a religious person and as a parent.
Perhaps: but couldn't religious persons and parents who take the opposite position argue just as strongly in the opposite direction? A straight mother who believes in same-sex marriage claims the absence of gay marriage diminishes her parental right in education. A religious gay man says his religious freedom is decreased because gay marriage is not legal. What marginal argument from parental rights in education or religious freedom can be made against gay marriage, that can't be made against its absence?
These are just a few reasons. So feel free to ask additional questions if you'd like!


I contributed to his campaign today. I look forward to his responses.
Posted by mistahdoom at 8:26 AM No comments: