Mormonism beyond the gender binary


Preview of my fMh post by the same title


Brad is a California attorney. He also earned a degree in biology and a Master of Public Administration at BYU. Brad is author of "Homosexuality: A Straight BYU Student’s Perspective", available on YouTube and in PDF. A Director of the Mormon Transhumanist Association, he also guest posted at fMh last year: Reflections of a Mormon Feminist: the role of women and men in and out of the church.

"The Age of Men is over. The Age of the Orc has begun."  - Gothmog (the elephant-man orc in Lord of the Rings) 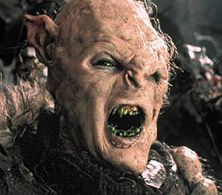 Do you remember that line, right after the bad guys destroyed Osgiliath?  'Twas a sad day for Middle-Earth.  Sometimes I feel the same way about the gender binary (aka everyone is either male or female) in Real Earth. "The Age of Gender is over.  The age of Postgenderism has begun."  In many ways, however, this straight Mormon feminist thinks the Postgenderism age will be a one-up on its predecessor-- rather than analogous to an invasion of ugly orcs.  But first, let me build some groundwork.  I will:
*Heads-up: there's a picture of a nude intersex individual below, in case you'd prefer to avoid it
(1) Explain why the gender binary fails

Everybody is either a boy or a girl- this is a pretty obvious and common sense proposition.  Until you examine it closely.
Though I explore the gender binary in greater depth in other places (e.g. Why Mormonism Can Abide Gay Marriage, a narrated slideshow on YouTube, or my blog post All people are either male or female: think again), the basic proof is not too hard.  We make a snap judgment of a person's biological sex based on appearance, and in almost all cultures map a gender onto the result.  However, anatomy fails as a biological sex discriminator: nature draws no black and white lines on the male-female axis.
Illustration: Let's say you have Taylor (I use this name because I have both male and female friends named Taylor).  Taylor just turned 16, and it's time to send Taylor to Laurel's or Priest's Quorum.  Where would you send Taylor if Taylor:

As you might imagine, there are a great many real members of our species who fit into at least one of the above categories.  We as Mormons assume a 1:1 correspondence of physical to spiritual gender (if that weren't true, wouldn't our opposition to same-sex marriage instantly vaporize?).  If indeed all people are either spiritual males or females as many Mormons conclude (one need look no farther than Boyd K. Packer's 22 Jan 2012 seminary centennial broadcast @42:20 for an example), then this assumption is clearly unsustainable.  If we can't even tell Taylor with confidence whether to go to Priest's Quorum or Laurel's, what's the use of telling Taylor that marrying a man will result in Taylor's excommunication rather than exaltation? What is the validity of claiming that all men must receive the priesthood to be exalted, if we can't even tell whether or not Taylor is a man?
"But," you might contend, "intersex folks are such a small minority- sure there are a few questionable cases, but that doesn't mean the whole male/female system is a failure." The border cases reveal the underlying truth we usually don't otherwise think of, however.  Sex and gender are a photomosaic rather than a binary: for everyone. 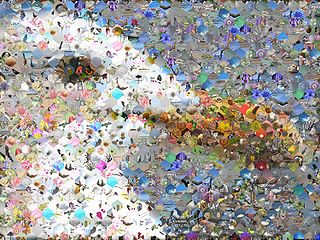 As you get closer to a photomosaic, what was once clearly a specific image is revealed as a collection of constituent parts, each its own picture.  (Don't blame yourself for being "gull"ible though, the vast majority of folks fit the stereotypes well enough to evade the radar).  Anatomical features such as genitalia, brain structures, and genes are a few of the underlying pictures.  So might be a particular individual's placement on the dimensions of aggressiveness, verbal fluency, libido, sensitivity, nurturing style, and sociality.  Sexual orientation is another sub-picture: though you see a female from a distance, that particular individual might have a male-type sexual orientation (i.e. towards women).  And even that picture may itself be a photomosaic of several other dimensions, e.g. repulsion towards men, repulsion towards women, hyper vs. asexuality, direction of romantic/spiritual/sexual attraction, etc.).  The transgender spectrum also helps show us how little we understand human diversity in the gendered space.  Taylor Petrey's excellent recent article, Toward a Post-Heterosexual Mormon Theology, explores some of these themes as well in the "Eternal Gender" section (page 120).  Bottom line: a primary lesson of biology, that human diversity is made up of a vast quantity of overlapping bell curves rather than 0's and 1's, finds vindication at this level of inspection.
The only trouble is, Mormons make quite a lot of the gender binary!  Even fMh relies on a crucial discrimination between male and female (though I'll concede "Mormon housespouses" doesn't have quite the same ring).
(2) Discuss the shortcomings of gender roles
Gender stereotypes really are a disservice to everyone, since the majority of individuals are sexually dimorphic/atypical for their gender on at least one trait (be it affinity for sports, talkativeness, sensitivity, sexuality, etc.).  In my case, I've been accused of being too chatty, rather than fitting the strong/silent type male stereotype.  What "girly" or "masculine" attribute do you have that's atypical for your sex?  Have you felt uncomfortable when someone pointed it out?
When we look at a person, rather than first seeing an individual, we see either a man or a woman.  That very lens through which we see them blinds us to their individuality by imposing a pre-fabricated map of gender roles and attributes.  Though some lenses are useful (e.g. the anatomy-based assumption of personhood is awesome, though it has a few flaws), the gender lens does far more harm that good.
Because I'd like to focus more on Postgenderism than on current gender issues in Mormonism, I'll refer to my gender roles post for elaboration on the negatives of gender roles.  Briefly: the Family Proclamation's emphasis on gender roles (e.g. men preside and provide, women nurture) evidences the importance of gender roles in Mormon thought.  The temple ceremony, priesthood exclusivity, and governance dichotomies clash with consensus contemporary notions of gender equality.
(3) Defend my view that Postgenderism will result in many genders, rather than no genders
George Dvorsky and James Hughes over at the Institute for Ethics and Emerging Technologies have an awesome article entitled Postgenderism: Beyond the Gender Binary.  The abstract:
"Postgenderism is an extrapolation of ways that technology is eroding the biological, psychological and social role of gender, and an argument for why the erosion of binary gender will be liberatory. Postgenderists argue that gender is an arbitrary and unnecessary limitation on human potential, and foresee the elimination of involuntary biological and psychological gendering in the human species through the application of neurotechnology, biotechnology and reproductive technologies. Postgenderists contend that dyadic gender roles and sexual dimorphisms are generally to the detriment of individuals and society. Assisted reproduction will make it possible for individuals of any sex to reproduce in any combinations they choose, with or without "mothers" and "fathers," and artificial wombs will make biological wombs unnecessary for reproduction. Greater biological fluidity and psychological androgyny will allow future persons to explore both masculine and feminine aspects of personality. Postgenderists do not call for the end of all gender traits, or universal androgyny, but rather that those traits become a matter of choice. Bodies and personalities in our postgender future will no longer be constrained and circumscribed by gendered traits, but enriched by their use in the palette of diverse self-expression."
The authors make excellent arguments about why technology will increasingly erode gender essentialism and the gender dyad.  I'll focus on the example I've written about: same-sex reproduction.  A male couple possess all the genes needed to make a person (a cheek swab from me has all the instructions for manufacturing a human egg).  A mouse with two and only two biological parents, two male mice, is already out there.  An artificial womb is, like the Death Star, not yet fully operational (but close).  In coming decades, lesbian and gay couples will likely procreate on their own.  Human cloning and the ability to select the physical characteristics (sexual orientation, genitals, etc.) of offspring and self will expand the choices available to individuals and parents further.
Rather than eliminating gender, however, this change will more likely result in a Cambrian explosion of genders.  More seagulls are likely to appear as we inch closer and closer to the photomosaic!  Already we have some precedents to look to- Tetrahymena thermophila, for instance, has seven genders.

There are many negatives in Mormonism that result from the mismatch of the gender dyad to the reality of human diversity.  One is opposition to same-sex marriage.  Robert George (a well-known conservative Catholic legal scholar), for instance, supported an opposition to same-sex marriage based on legitimizing only marriages between two people that have between them both a penis and vagina (don't take my word for it- see his article, What is Marriage?, yourself).  It is long past time to put this type of argument to bed- and a proliferation of genders will help accomplish that ideal.
Other negatives, such as the lack of governance access to women, would probably evaporate in the face of a plurality of genders.  Family gender roles informed by unmerited claims about spiritual attributes (e.g. women are primarily responsible for nurturing) would disappear, to be replaced by free arrangements informed by the uniqueness of the couple and situation.  Priesthood and temple dichotomies would be reformed to reflect the realities of human diversity and our ignorance about spiritual gender.  The otherizing of intersex and transgender folks would decrease.
"Postgenderism is a radical interpretation of the feminist critique of patriarchy and gender, and the genderqueer critique of the way that binary gender constrains individual potential and our capacity to communicate with and understand other people. Postgenderism transcends essentialism and social constructionism by asserting that freedom from gender will require both social reform and Biotechnology… biotechnologies, neurotechnologies and information technologies make it possible to complete the project of freeing ourselves from patriarchy and the constraints of binary gender. Postgender technologies will put an end to static biological and sexual self-identification, allowing individuals to decide for themselves which biological and psychological gender traits they wish to keep or reject." - Dvorsky and Hughes
As individuals and parents become increasingly capable of selecting for the anatomical sub-pictures that underly our discrimination of who is male and who is female, the flowering of human choice and diversity will replace its gender binary predecessor.  The fall of racism individualized and equalized previously stereotyped members of racial classes.  Similarly, the fall of the gender binary will largely be a good thing.  Luckily for us, the Postgender future has already begun to dawn.

Posted by mistahdoom at 5:31 PM