The Church just published online a resource entitled "Bishop's Guide: Same-Sex Attraction." Below is my Facebook comment responding to the same, which I also submitted to the site under my own name as feedback. 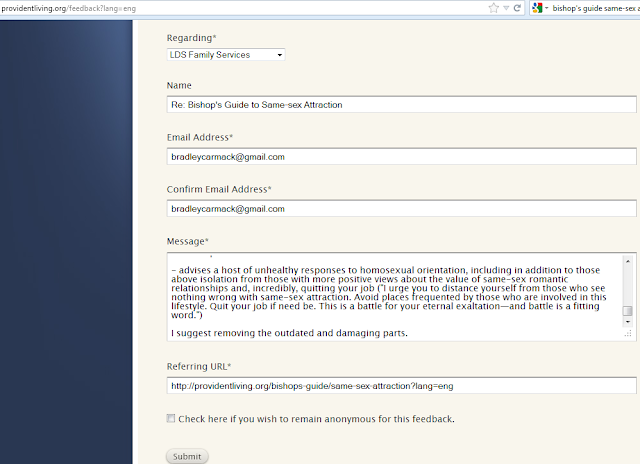 There's a lot to like. For instance, the emphasis on "expressing love and acceptance to the individual is an important step to minister to him/her" is appropriately central. Also, placing primacy on the "seek to understand" step is productive.The downsides, however, are many. As Edward pointed out, several old and largely counterproductive myths are underscored, such as (a) the positive correlation between loneliness/rejection and the strength of homosexual feelings, (b) the utility of avoiding triggers, (c) the relationship between lack of emotional connection and homosexual feelings, and (d) a connection between homosexual orientation and addiction, abuse, or emotional health. The additional resources links also in many cases provide tired, inaccurate anecdotes which: - compare homosexual orientation to "alcohol, tobacco, pornography, gambling, or other serious sins." In addition to failing to distinguish between temptations and actions, this depiction grossly misrepresents the value of same-sex romantic relationships- repeatedly depict homosexual orientation as a "problem," "burden," "trial of faith," or "challenge." E.g. "many of us are developing spiritual muscles through the calisthenics of adversity. This is a fight that can forge a profound closeness with Heavenly Father and the Savior because victory hinges on our ability to rely on Them completely." - fail to use terms such as "gay" and "homosexual orientation," opting instead for the "same-sex attraction" phrase that fails to match the permanence, depth, or centrality to identity that most homosexuals (and their heterosexual counterparts, myself included) would ascribe to their sexual orientation- inappropriately burden homosexuals with the unrealistic and unhealthy expectation that they fight same-sex sexual fantasies (" we still have the power to resist and reform our feelings (as needed) and to assure that they do not lead us to entertain inappropriate thoughts"). Though extreme frequency of sexual fantasizing can become as a mental issue, for the majority of naturally sexual people this type of expectation has caused and will continue to cause unneeded and regrettable distress. - suggests "victory," "overcoming same-sex attractions," "battle," and "healing" to those who are righteous enough, a pernicious idea that has caused untold damage to thousands of gay Mormons over the past 4 decades- advises a host of unhealthy responses to homosexual orientation, including in addition to those above isolation from those with more positive views about the value of same-sex romantic relationships and, incredibly, quitting your job ("I urge you to distance yourself from those who see nothing wrong with same-sex attraction. Avoid places frequented by those who are involved in this lifestyle. Quit your job if need be. This is a battle for your eternal exaltation—and battle is a fitting word.")- sidesteps the majority experience by highlighting minority cases, such as successful mixed-orientation marriages where the gay spouse feels diminished homosexual attraction. "I found that my burden had been lifted sufficiently to pursue marriage. My struggle with same-sex attraction rarely comes up these days. She knows of my challenge—something I still face from time to time but am able to manage—but it doesn’t define our relationship. " Also,"I know some people who struggle with same-sex attraction experience the burden being lifted entirely; they’re able to overcome it. That’s not the case for me. I still struggle with emotions or thoughts from time to time, and it takes strength and energy to manage them. I also know people who may not have the blessing of having it somewhat alleviated, as I have. I don’t know why people face challenges—this one or any other—with such different outcomes, but I do know that our God is not a cruel god. And I know that obedience brings peace." Obedience in the form of avoiding same-sex romance has not brought peace to countless gay Mormons who, unsurprisingly, find celibacy or mixed-orientation relationships anything but peaceful. Would the majority of us (i.e. the straights, myself included) expect to find peace if we avoided all romantic and sexual relationships with a member of the opposite sex?- repeatedly suggest that dating and marriage can or should be pursued when same-sex attractions are sufficiently diminished (the latter being an independently problematic proposition) "I hope to one day sufficiently curb my attractions to make the first tenuous steps toward dating" also,"'Marriage should not be viewed as a therapeutic step to solve problems such as homosexual inclinations or practices, which first should clearly be overcome with a firm and fixed determination never to slip into such practices again.' The ability of individuals with same-sex desires to date and marry depends on their progress made with the Lord’s help in overcoming these attractions—an effort that is neither easy nor quick."- perpetuates the twin, false/unfounded, and insidious propositions that (1) sufficient faith and effort has resulted, for many, in overcoming homosexual orientation, and (2) gay Mormons should focus on the next life, at which point they will be made straight and can then be a spouse in a straight, opposite-sex marriage. "While many Latter-day Saints, through individual effort, the exercise of faith, and reliance upon the enabling power of the Atonement, overcome same-gender attraction in mortality, others may not be free of this challenge in this life. However, the perfect plan of our Father in Heaven makes provision for individuals who seek to keep His commandments but who, through no fault of their own, do not have an eternal marriage in mortal life. As we follow Heavenly Father’s plan, our bodies, feelings, and desires will be perfected in the next life so that every one of God’s children may find joy in a family consisting of a husband, a wife, and children."It is difficult to imagine a teaching more conducive to suicidal ideation. Given (1) the centrality of man-woman marriage to God's plan, and (2) the practically non-existent odds of a gay person becoming straight in the next few decades of his/her life, it is unsurprising that a significant proportion of gay Mormons have considered, attempted, or succeeded at killing themselves. Conclusion:Besides contributing towards the continued push of gay Mormons towards the suicide ledge, I'd say the resource is a step in the right direction.