A Critique of the LDS Prop 8 Amicus Brief: "reliance interests" as the new rational basis for opposing same-sex marriage

Von Keetch's name is the first to appear on the LDS-led coalition amicus filed in support of the proponents of Proposition 8 in the SCOTUS case that will likely be decided this summer.

If you want to sue the Corporation of the President of the Church of Jesus Christ of Latter-day Saints, Von Keetch is your man. 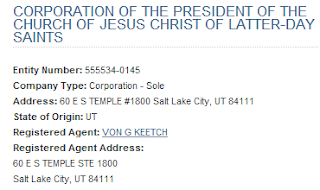 He's also exceptionally competent and the best stake president I ever had, leading my BYU stake for three of the years I lived at the Alta Apartments. Below, I offer my licensed attorney's first blush responses to the brief Von filed with the Supreme Court of the United States.

First,
I am fascinated by the alliance evidenced by this particular document: one part Southern Baptist Convention, two parts Evangelicals, one part LDS, and a few others (including a union of Orthodox Jewish Congregations). I find it significant that this ecumenical coalition, despite their differences, united on submitting this religious freedom-asserting opposition to same-sex marriage.

Second,
I confess that I find many reasonable arguments in both the analysis and the summary.
In many places, the amicus appropriately cited precedent that accords a place for religious voices in public debates.

Third, I find that the brief does not fairly represent the diversity of views of same-sex marriage held by those that constitute the members of the participating entities:
Perhaps the authoritarian, hierarchical structure of the LDS institution permit the maintained illusion that the LDS membership is united in the view that traditional marriage is "essential to the welfare of the American family and society" and "indispensable to the material welfare of children, families, society, and our republican form of government." However, the brief was not filed on behalf of the Corporation for the President of the Church of Jesus Christ of Latter-day Saints, and thus it would be more accurate to say "some" or "most" when representing the memberships' views. I anticipate that the many LDS pro-marriage advocacy groups (including Mormons for Marriage and Mormons for Marriage Equality) might arch an eyebrow at being informed that they affirm traditional marriage at the expense of a definition that includes same-sex couples.

Fourth, the amicus hid a few surprises. As the rational bases for supporting Prop 8 seem to have failed both the district and appellate level in the Ninth Circuit, the brief asserts two bases that, I think, are relatively novel:

"Proposition 8 is valid for additional reasons the court of appeals did not consider. Judged by conventional rational-basis review, Proposition 8 reasonably serves the legitimate ends of restoring the definition of marriage congruent with the people’s moral sense and protecting the substantial expectation and reliance interests of opposite-sex couples in the traditional institution of marriage. Each of these rationales independently satisfies the Equal Protection Clause."

These two are new to me. The latter is fairly easily toppled: the same argument could be made along the race dimension by racially matched couples before anti-miscegenation laws were declared unconstitutional in Loving. Picture white Jane and white John arguing that you can't define marriage to include black Sarah and white Joseph because Jane and John grew up expecting all marriages to be between partners of the same race. The amicus addresses this inconsistency:


"By 1967, if not long before, it was pellucidly clear that anti-miscegenation laws were antithetical to both the Fourteenth Amendment’s core prohibition on racial discrimination and the Nation’s highest moral values. Indeed, by then no credible voice defended such laws, as they were obviously just naked attempts “to maintain White Supremacy.” Id. at 11. Here, in contrast, there is no clearly established constitutional right to same-sex marriage and there are credible voices in politics, academia, and religion as well as leading members of the bench and bar defending the constitutionality and wisdom of traditional marriage."


I would point out that both slavery and anti-miscegenation enjoyed support from "credible voices in politics, academia, and religion as well as leading members of the bench and bar defending the constitutionality and wisdom of traditional marriage." Much of the amicus relies on a very strong appeal to tradition, a well-known logical fallacy which nonetheless is the basis for our precedence-leaning federal common law system. The reasons appeals to tradition fail are obvious: oppression of women and disenfranchisement of blacks, for instance, both enjoyed long recognition and moral approval but are both harshly and broadly condemned today.

We have no qualms about defining "citizen" to include women and people of African descent, even though at the time some citizenship laws were passed or upheld by judges, those demographics were not contemplated as part of the definition. Similarly, the brief's recitation of cases affirming marriage (for some reason, the brief repeatedly cites 19th century cases and references John Locke, Adam Smith, and David Hume) are unpersuasive in the context of a debate over what marriage legally is. Further, the existence of a clearly established right to same-sex marriage under Romer and Bowers is argued, and not as lacking as claimed.

Thus, we are brought back to square one: are marriage definitions that preclude same-sex couples antithetical to federal prohibitions against sex discrimination and the Nation's highest moral values? Let's see if the second newbie holds an answer to that question, rather than the mere appeal to two fallacies (popularity and authority, in this case) offered by the first basis.

On its face, restoring the definition of marriage congruent with the people’s moral sense appears a candidate reason that might be considered rational.


Because the CA supreme court recognized same-sex marriages shortly before Prop 8's passage, the word recovered does some appropriate. Yes, the meaning of marriage was changed away from the man-woman only meaning that most held precedent to the court's decision. Yes, the recovery was most consistent with the moral sense of CA voters, as the majority voted in favor of the Proposition. I suppose the same basis could be posited in favor of an anti-miscegenation Proposition, had a CA court similarly began recognizing racially-mixed marriages and the majority of CA voters voted in favor of such a positions. However, aside from that rebuttal, the basis strikes me as rational.

Fifth,
I notice that the brief somewhat ironically notes how little treatment the subject of homosexuality receives in church.

"Our faiths uphold the virtues of marriage and family life through teachings and rituals that seldom mention homosexuality."

From my perspective, this fact leads naturally to the conclusion that the LDS Church should naturally embrace same-sex marriage, as the anatomy of the two partners bears no necessary impact on the spiritual aspect of their union, commitment, and household. The brief's recitation of "We are among the “many religions [that] recognize marriage as having spiritual significance,” Turner v. Safley, 482 U.S. 78, 96 (1987), indeed as being truly “sacred,” Griswold v. Connecticut, 381 U.S. 479, 486 (1965)" is consistent with a same-sex marriage-embracing approach.

Sixth,
I detect an unfair depiction that is weaved through several portions of the brief.

I don't think heterosexist marriage is more focused on societal and children's needs than a sex-neutral construction. Nor would man-woman-only marriage be less focused on the desires of the couple. As Judge Walker pointed out, marriage has long been recognized as the forming of a household by two adults: and a same-sex household is neither more nor less structured to the needs of children than is an opposite-sex one. The old "homosexual relationships are selfish and heterosexual ones are focused on children" argument never made sense to me. There are fertile and infertile opposite-sex marriages that are averse or abusive to children, and same-sex ones that are very welcoming of the same. Similarly, there is no structural aspect of the relationship that is more or less focused on the desires of the couple. The reasoning here is a head-scratcher for me. 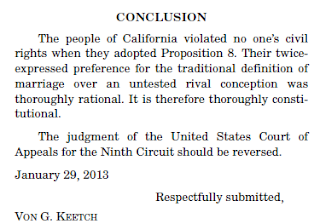 I conclude that I'd like to read some more analyses. :-) What have others said about the brief?
Posted by mistahdoom at 7:43 PM