A framework for understanding and communicating emotions

A friend recently offered a repair conversation after a situation where I felt disappointment after their behavior. I gratefully accepted the offer, since to me it shows the friend cares about trust in our relationship. Though I'm not quite sure what that repair conversation will entail, I expect it will include sharing and reflecting how I felt and why, with an aim of emotional understanding.

To prepare for that conversation, I reflected on my theory of how emotions work, to help me decide what and how to share. After mulling it over, I decided it would be useful to write out my model and use it as a framework for sharing my emotions in that repair conversation.

My model is rooted in CBT (cognitive behavioral therapy), which as I understand it posits that expectations are what convert a neutral stimulus into a trigger of emotion. To illustrate:

So, expectations are the flint that combines with the steel of an event, to kindle the flame of emotion. That's far from the whole story, though.

Using the example above, Sean might typically feel a 3 out of 10 on anger from this trigger; but what if he's really tired? Or what if it's the third time in a row Julie was late, and they had discussed Julie's tardiness the day before: might the emotion be stronger than a 3 in these scenarios?

Accelerants and decelerants affect the intensity of the emotion.

This is where I have something to add to the typical CBT model. I believe a multitude of factors influence how strongly emotions are felt: I call factors that increase the intensity accelerants, and those that decrease the intensity, decelerants.

Further, I categorize these accelerants/decelerants into one of two buckets: circumstances and narratives, which I will illustrate shortly. This results in a quadrant: 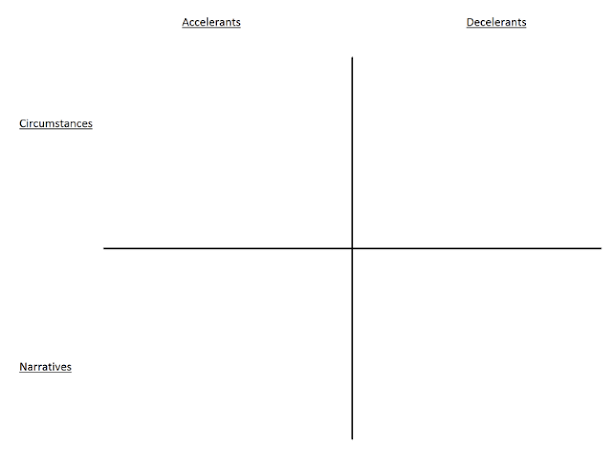 I illustrate these four quadrants using the Julie/Sean example, and write from Sean's perspective.

These are environmental factors that impact what your psychological state is right before the trigger.

[accelerant] -I've had a long and stressful day of problem-solving at work, so I'm more likely to perceive an issue that arises in the evening as major, rather than minor

[decelerant] -My coworker's mother just died and I learned about it a couple hours ago, and as a result I'm feeling more forgiving and gentle than usual

[decelerant] -One of my favorite singer's hits just played on the radio, so I'm feeling less bothered by things than usual

Like circumstances, the stories we tell ourselves can radically change the intensity of an emotion we feel, such as joy or disappointment. As these examples from Sean's perspective illustrate, they can be quite complex.

[accelerant] -My guy friends show up to our get-togethers on time, this is the umpteenth time this year a woman has been late to a scheduled date with me.

[accelerant] -Based on numerous inputs including my own dating experiences, I've noticed a trend in hetero dating where women expect men to do the lion's share of proposing, initiating, and organizing dates. This feels unfair since time/place/activity doesn't happen naturally, takes work, and requires vulnerability and risk-taking (oh no, I proposed Italian food and forgot she's gluten intolerant, she'll think I'm inconsiderate!!). I do it because I value the outcome enough, but resent the sexism and inequality of it. She didn't do any of the work and risk-taking, all she had to do was show up, and she didn't do that on time: screw that!

[accelerant] -This is just the latest example: this person is usually late, which indicates they don't manage their time well, which predictably and negatively impacts the people in their lives, and as an accountable adult whose actions affect others, they should do a better job at their baseline time management and aren't even trying to do so.

[decelerant] -I remember one of the takeaways from the fundamental attribution error is that peoples' behaviors are usually better explained by circumstances, than by their motivations or character. Sure she was late, but she probably needed to help her son with homework, or hit unusually heavy traffic.

[decelerant] -I decided months ago to accept this person's chronic tardiness, and I embrace that acceptance in this moment as well.

These factors are usually invisible to everyone except the person feeling the emotion (and as emotion experiencers we're often unaware as well!). With reflection and practice aided by this model, however, the experiencer can more fully understand their emotions, triggers, accelerants, and decelerants.

This framework can be used as a worksheet to more deeply understand one's own emotions or to share them with another, ideally in an NVC (nonviolent communication) conversation. Fill in the following:

I used this approach and wrote out each of the seven above in preparation for the repair conversation with my friend. Wish us luck!
Posted by mistahdoom at 9:45 PM